Eager to get started? Here's a brief rundown on how to play and operate Singo:

A standard game of Singo consists of three rounds: SINGLE LINE / DOUBLE LINE / BLACKOUT. Players will use and mark the same card throughout the game. You only need to issue new cards when beginning an entirely new game of Singo.

Ready to get into the details? Keep reading! 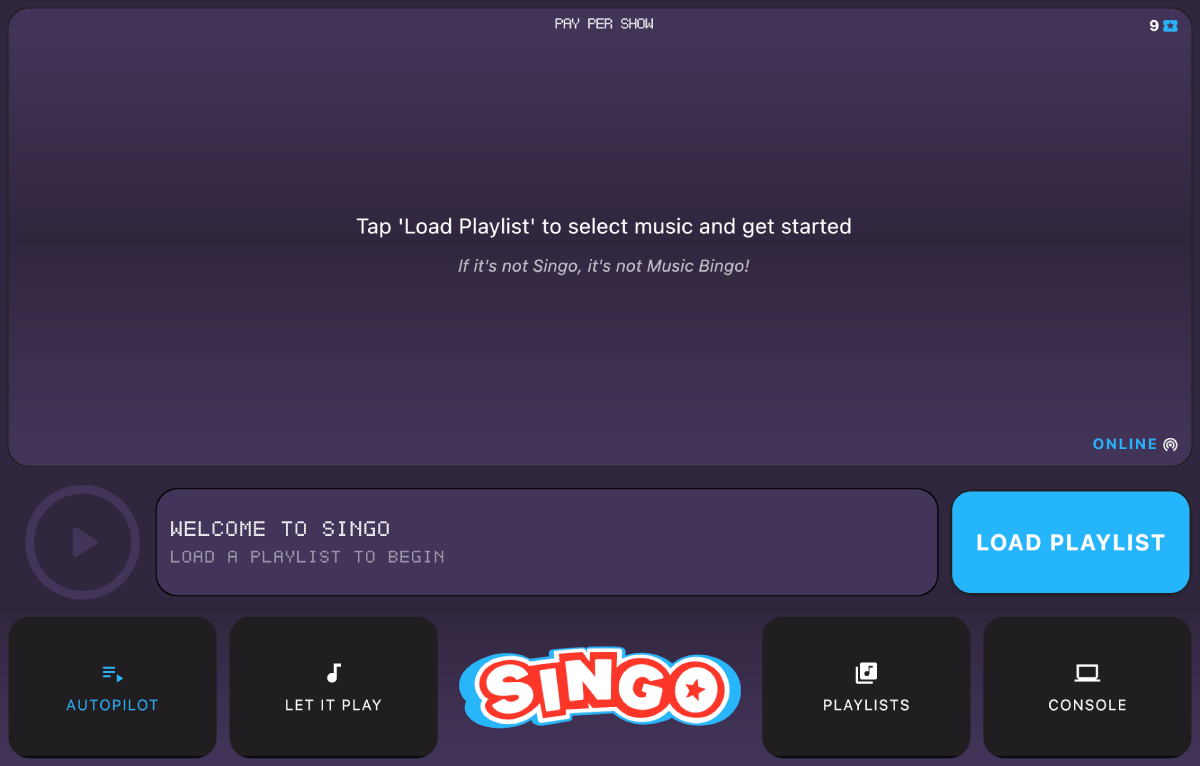 You're currently looking at the Singo Console -- where all the magic happens! When you first load the console it is in an empty state. Typically you will start by loading a playlist, but before we get rolling let's review the various buttons and elements on the console.

The top portion of the screen is your timeline. Currently it's empty and prompting us to load a playlist, but when a game is active you will see a scrollable timeline of songs that will be played / have played.

Here's the standard journey that the Action Button takes during a game:

You can run an entire game of Singo using ONLY the Action Button!

The menu bar is the strip of buttons at the bottom of the Singo Console. This is where you can fine-tune the game, perform additional actions, and access various parts of the system -- read on for a rundown.

The Autopilot function will run the game automatically without any interaction by the host. By default Autopilot is enabled and will delay one second in between clips. You can modify the timing via the Singo settings screen. If you toggle this feature off then clips will only play when the host taps the Play/Pause button.

Singo automatically plays “the good parts” of songs, so it's only natural that your crowd will sing along -- loud and often! In the event that you want to keep the party going, the Let It Play function is for you! Simply enable Let It Play and Singo will continue the song until it completes or you decide to stop it by tapping Let It Play again to turn it off.

The Playlists button will open up your Playlist Library where you can access all of the playlists you have downloaded, as well as download more.

The More button opens a menu that allows you to access more of the Singo system. You can access our Playlist Builder, switch your active venue, as well as access various tools for interacting with the game including: starting a new game, manual winner verification, advancing the round, skipping a song, and selection of round's winning pattern. 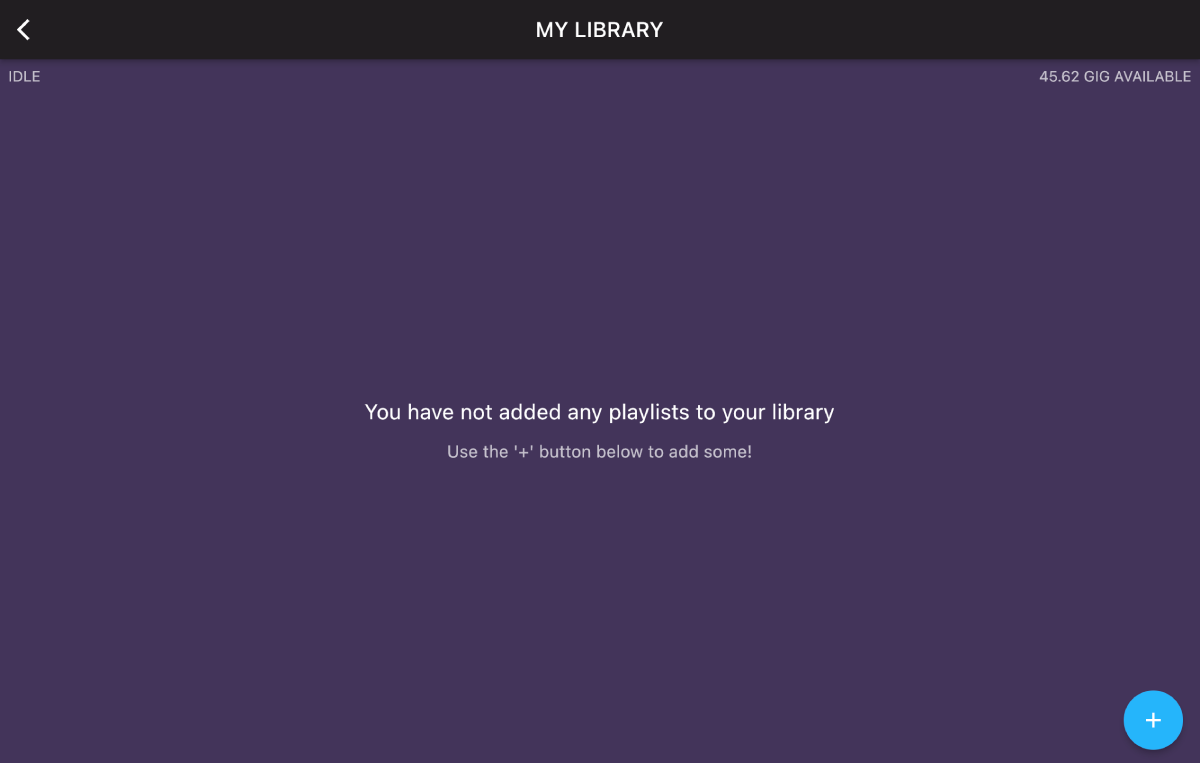 Currently our Library is empty -- no worries, let's download a Playlist by tapping the “+” button in the bottom right corner of the screen. 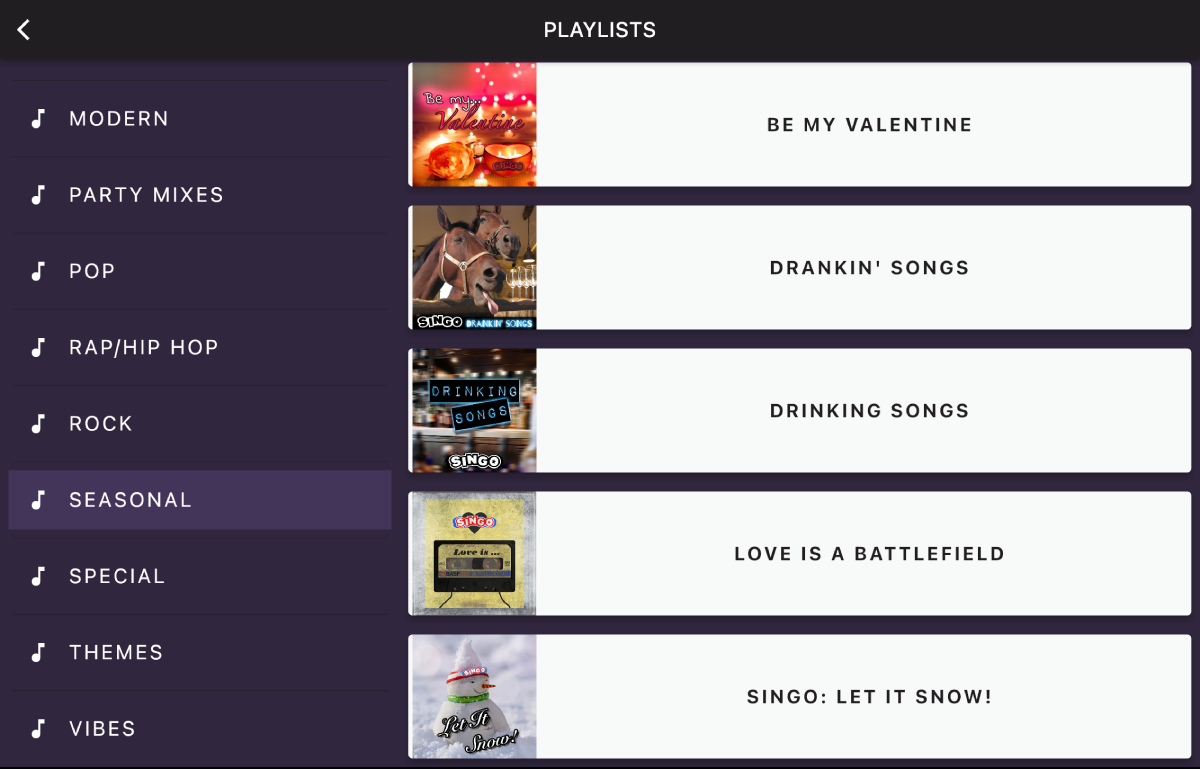 The Playlist Browser is where you can access all of the content Singo has to offer. The left side of the screen shows categories, while the right side lists the categorized playlists. Tapping a playlist will bring up the detail screen. 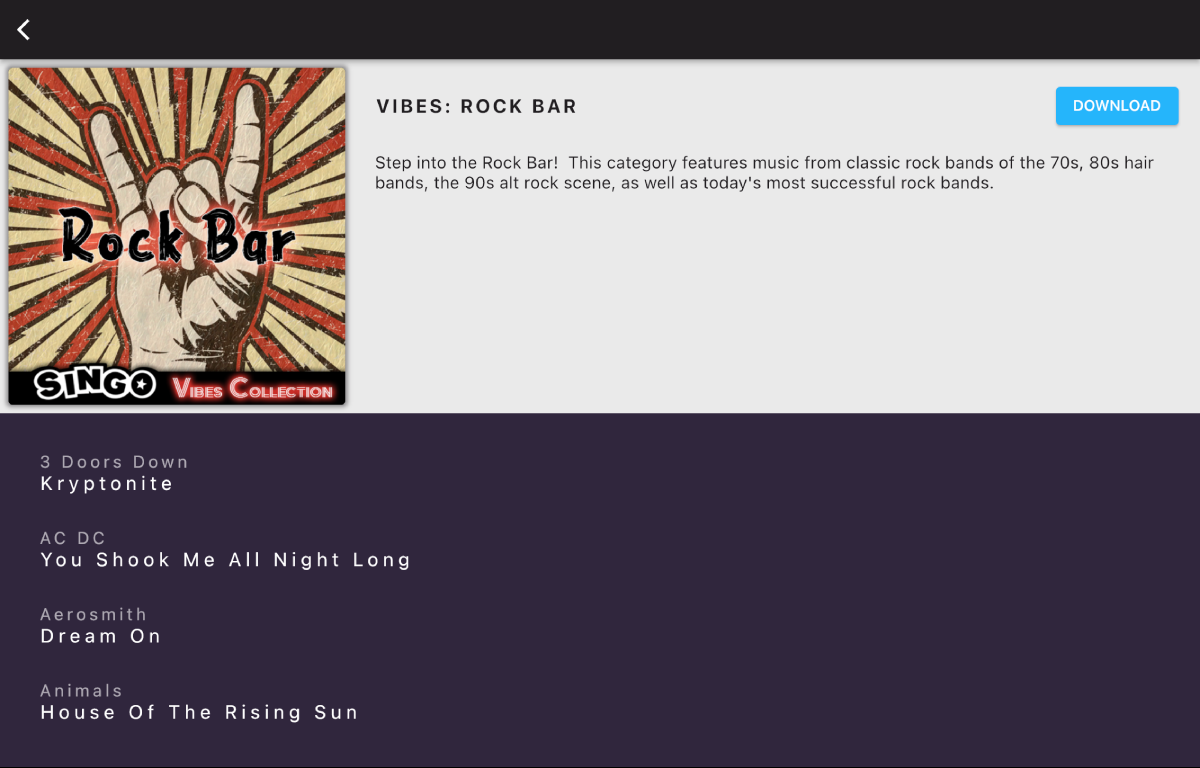 The Playlist Detail screen will show information about the currently selected playlist, as well as a Download button.

Tapping the Download button will install the playlist to your device. While internet access is required to download playlists, once they are downloaded the music will play with or without connectivity. 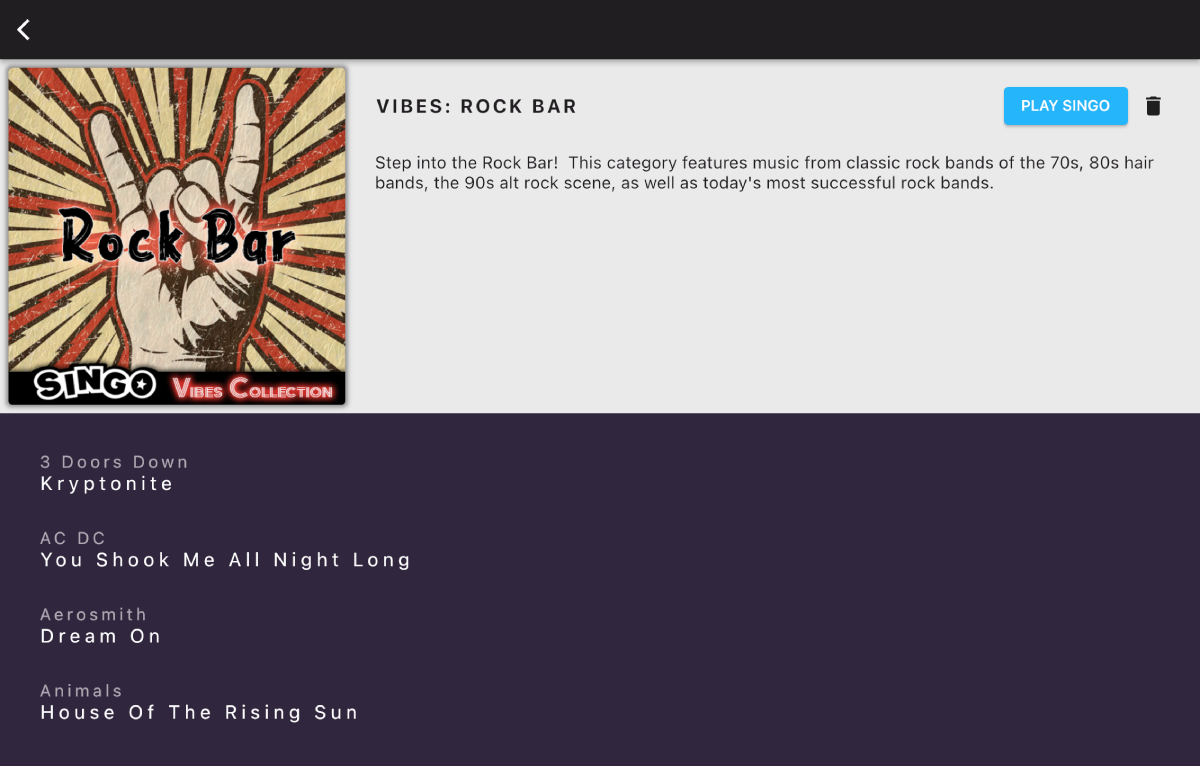 Let's load the playlist into the Singo Console by tapping the Play Singo button. 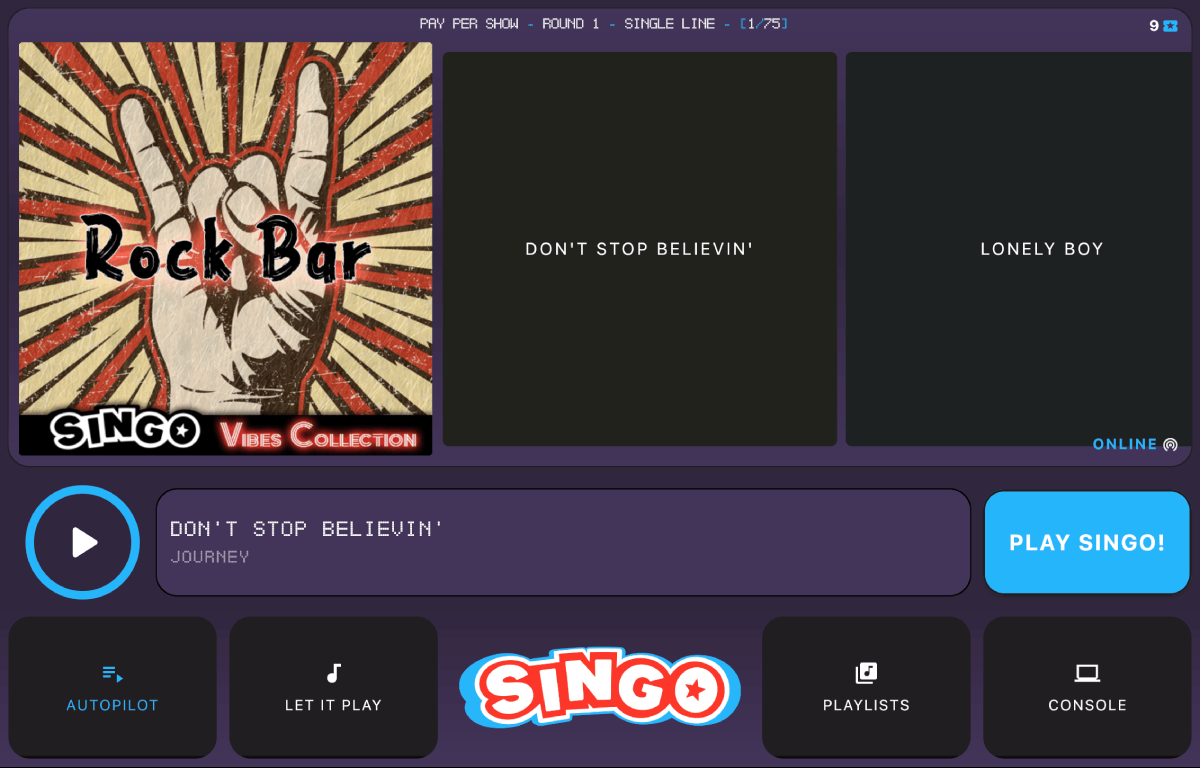 The playlist is now loaded into the Singo Console, and we are ready to play! Before we get started let's take a look at a few elements that have changed or updated now that the player is ready.

The very top of the console shows the status of your game. Currently, we can see that we are on Round 1 using a winning pattern of Single Line, and we are on song 1 of 75.

The Timeline is updated with the shuffled songs as well as the cover artwork for the currently loaded playlist. You can scroll through the timeline at any point to view past or upcoming songs.

The play bar has come alive! The Play/Pause button is active, with a blue outer ring that will show a countdown of the remaining time left in the current song. The current song is displayed in the readout, and the Action Button now reads “Play Singo!”. 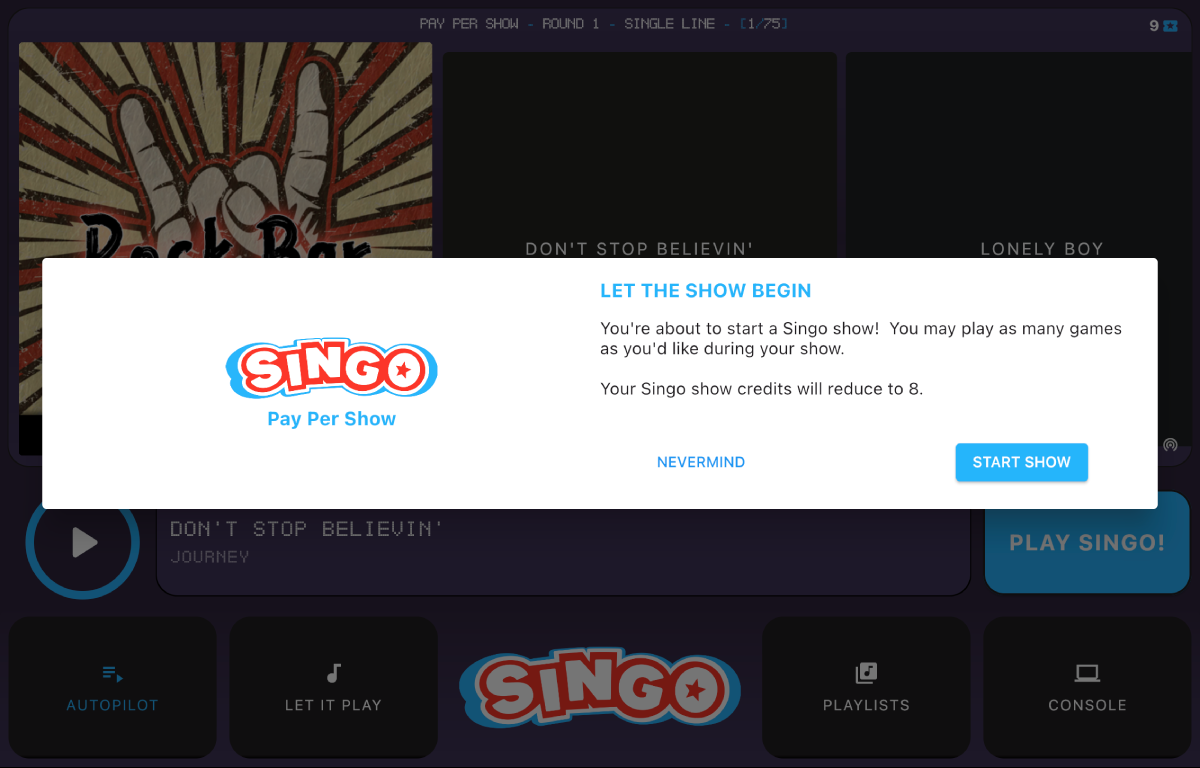 Tap 'Begin Game' and then tap 'Start Round 1' to start the music and begin playing Singo! 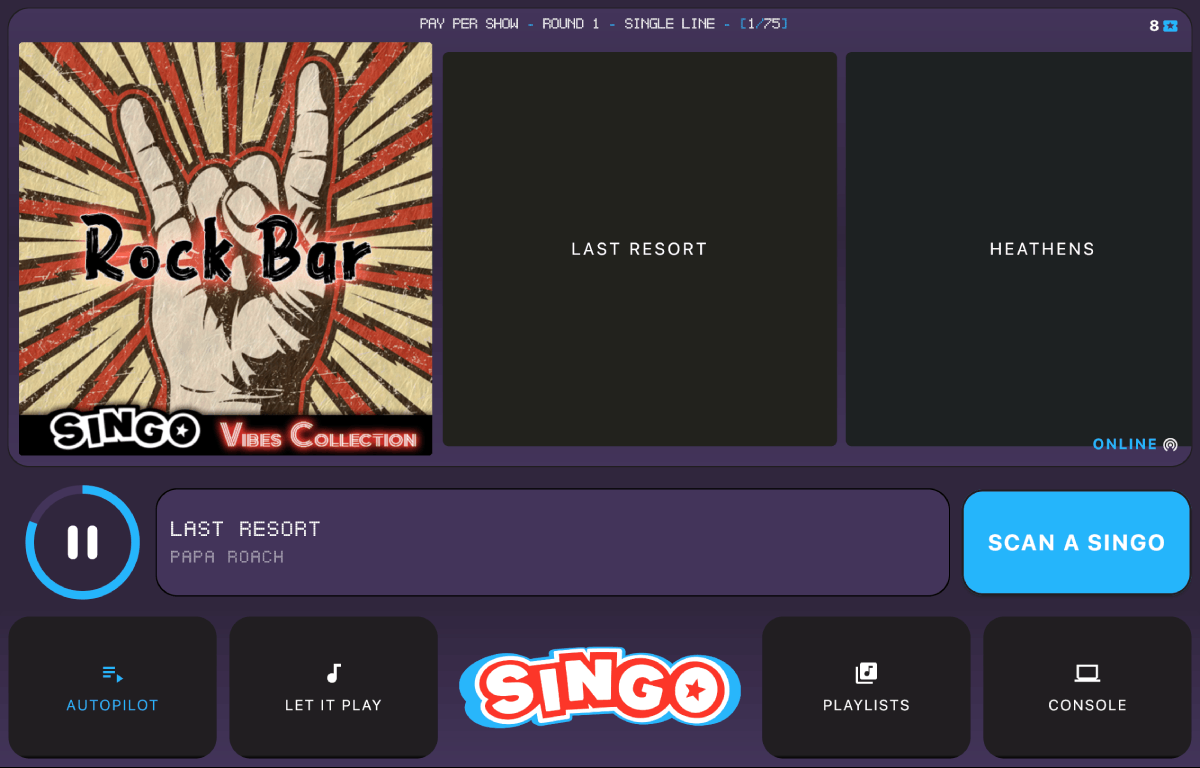 Autopilot is on and the music is playing, you can kick back and relax until one of your players matches the winning pattern. You'll notice that the Action Button now reads 'Scan a Singo'. Tapping this will open up the camera on your device so you can scan the winning card. Singo will automatically verify the winner, but if you run into trouble (sometimes players will scribble over their QR code -- oops!) you can manually verify the winner and then advance to the next round by tapping More in the menu bar and then the Manual Singo / End Round option.

Go ahead and tap 'Scan a Singo' to open the card scanner. 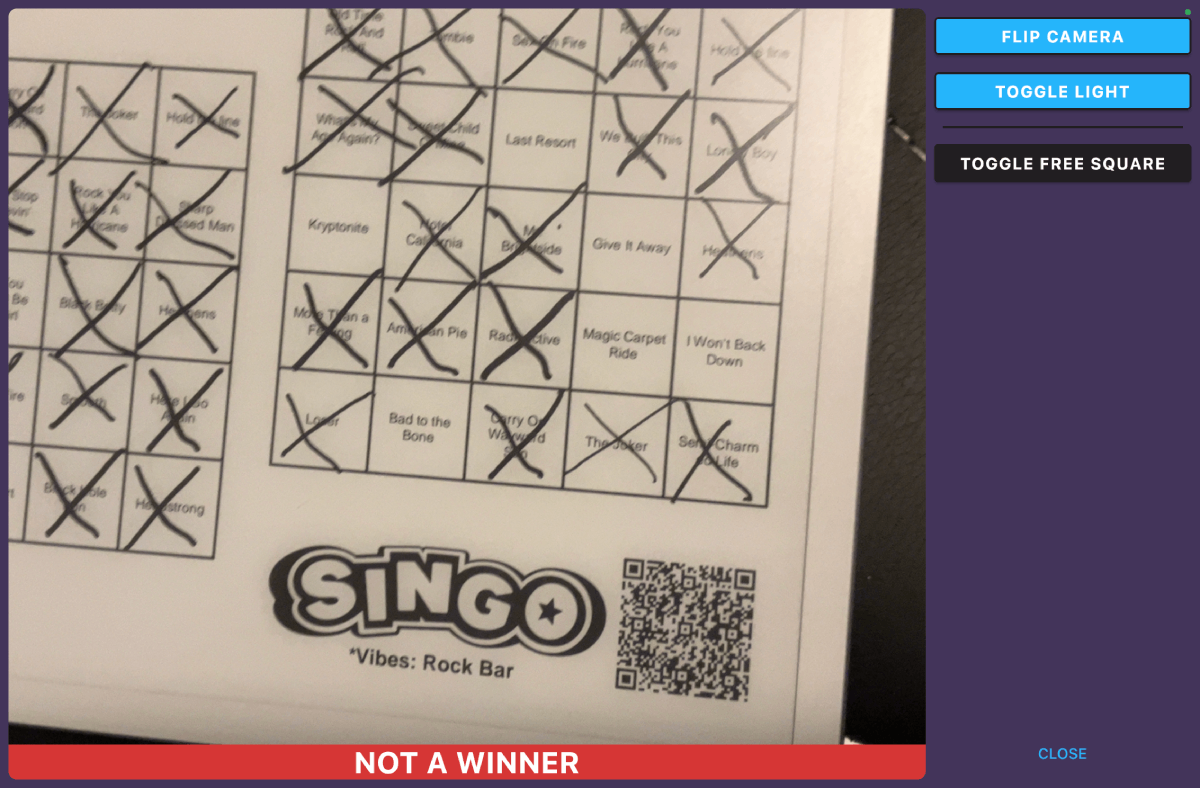 By default Singo will play suspense music and scanner sound effects, both of which can be disabled in Settings. The are controls to flip between the front/back camera (if equipped), and a flash toggle. Simply scan the Singo QR code to check for a winner -- Singo automatically verifies the win and shows the results on the bottom of the scanner window. You may scan as many cards as you'd like, including multiple winners should that happen.

Tap the 'X' to close the scanner and return to the Singo Console.

Repeat this process until all three rounds have been completed -- congrats! Your first Singo Night was a huge success!